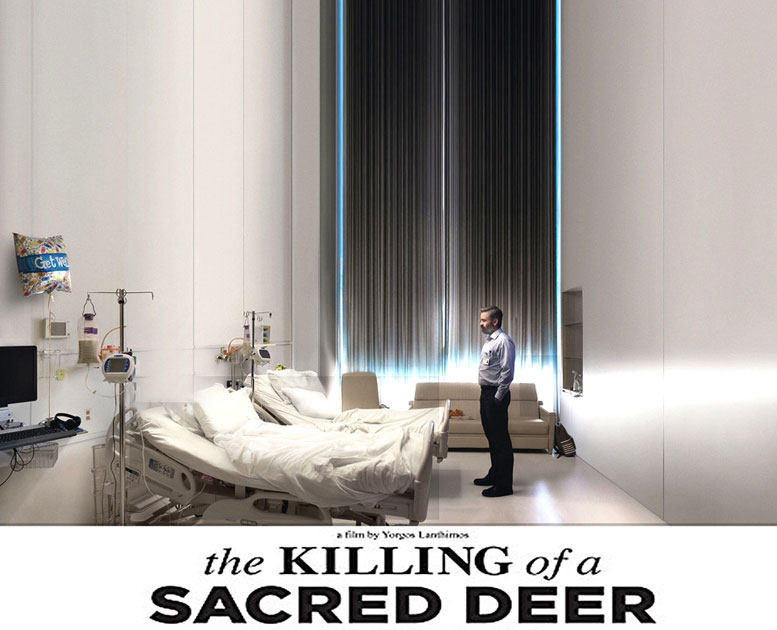 REVIEW: The Killing Of A Sacred Deer

A film should always be considered art. But what, exactly, is art? That question has been around for 1000 years but at it’s base any piece of art should cause you to feel something which means you’ll end up being changed in some personal way after experiencing it. So, when I see the title “The Killing Of A Scared Deer” I expect to come away from it having been changed by hopefully going through a series of emotions that I’ve never felt before. I have high expectations for any art that has been given such an intriguing title. I expect to feel something from this.

Yorgos Lanthimos is definitely an artist who uses the medium of film to make you feel something – that is the point, that is the goal. What is really great about this film is that I’m still not sure what range of emotions I went through while watching it, but those emotions came in unexpected ways, and that is the point. You are forced to confront your emotions to get the message.

Colin Farrell, in his second role in a Lanthimos film, plays Dr. Steven Murphy, a handsome and very successful heart doctor married to Nicole Kidman, successful Opthamologist Anna, mother of his two overly ambitious children, one boy and one girl. I’ve never been excited by either of these two actor’s but in this film their characters are fantastically emotionless and sterile, neither happy nor sad, they are even and steady, they are the perfect family! But no! They aren’t perfect are they? They are far too wealthy to be perfect and the wealthy are always perfectly flawed, but to what degree? Lanthimos knows we know that so we can move on to more interesting points.

Enter the super creepy Barry Keoghan as Martin, now we have a film! We know the starring couple has a weirdo sex life, the two kids are at the perfect age and social status to have their own shit going on, the Doctor has an intense career, and now he’s meeting up with a poor kid in parking garages and a diner on the side. What is this? Is he sleeping with a teen-age boy? This kid is so weird he seems like a hustler, so maybe?

No, this film is too well thought out for it to be that pedestrian. Wealthy white men have sex with teenagers all the time, what this powerful Dr. has done is much worse. I see it now, being a Dr. with a perfect family, respect, money, power – yes, power. Martin’s father is dead and he’s going to make the good Dr. pay for it but not with a few free meals and an expensive gift here or there. We know that immediately when Martin tells the Dr. he’s going to take the watch he’s just given him back to the jewelers and trade it for one with a different band.

Martin starts to stalk the good Dr. showing up at the hospital and causing staff to wonder what’s going on – he’s just helping the poor boy. Then Martin has befriended the good Dr.’s family, even starts dating his teenage daughter, this is good, then uncomfortable, then really bad. We’ve seen this stalker bit before but not like this.

Something terrible is about to happen to shatter the perfect lives of the Dr. and his family which unfolds like a Greek Tragedy but in the antiseptic trappings of those who appear to be too clean. There will be revenge, we know that now, and suffering by everyone. The viewer has already been through a range of unexpected emotions, mostly unease or some form of anxiety, but the real mix of sensations comes through when we are all forced to confront what the Dr’s punishment must be for playing God with other people’s emotions. Actions have consequences and sins must be cleansed.

https://youtu.be/3FKcupplP8c Synopsis from The Austin Chronicle: "After a decade and a half absent from American screens, Jia Zhangke’s 2006

REVIEW: “The Witches,” A Roald Dahl Fantasy Comes To Life

https://www.youtube.com/watch?v=4IVKVZ-Yk-c Synopsis from RollingStone: "He’s given us eccentric candy moguls, massive traveling peaches, a dapper fox and his friends,